Excuse me Mr. Frazier, but you still have some very important questions to answer. Questions that weren’t asked by the Warren Commison, the HSCA, by Vincent Bugliosi at “The Trial of Lee Harvey Oswald”, or most recently by the 6th Floor Museum’s Oral History. This article might ruffle some feathers in the research community, as Buell Frazier has become somewhat of a “sacred cow” to a lot of people in the Dallas area and the research community. Yet I firmly believe that as Mr. Frazier seems like a likeable, kind, and gentle soul, he holds a very deep, dark secret close to his heart. I think he’s getting closer to telling it though, he tried to avoid the HSCA investigation like the plague, he has in the past, been out of reach of researchers, only coming out to do the occasional media piece roughly every 5 or 10 years to media outlets. This year however, he made his way to D.C. to speak at the AARC conference, and then again with his son in Dallas at the Lancer conference. At 69 years young, Buell Frazier could potentially be around for quite a long while yet, which is hard to fathom from someone so tightly tied to this case. He is oft forgotten in the big scheme of things, but was a very important piece of this case. He humanized the “crazy lone nut” by describing him as a family man who loved his children very much…but, he also put a package going in to the TEXAS SCHOOL BOOK DEPOSITORY in the hands of Lee Oswald the morning of November 22, 1963. I’m not going to rehash the “official story” according to Buell Frazier as told to the DPD and the Warren Commission, I think we’ve all heard that before. He stated Lee Oswald brought a 2ft. long package wrapped in brown paper to work in his car that morning and that it supposedly contained curtain rods. The obvious problem with this assertion is that no bag of those dimensions were found in the building, no curtain rods were found in the building, and Oswald, while in custody, while openly admitting to other aspects of his life, what he did, where he went, he denied the curtain rod story. Also problematic of Frazier’s package story, is that the rifle in question, could not be broken down enough to fit in a 2ft. long paper bag package. Lastly, long time TSBD employee Jack Dougherty, claims to have seen Oswald arrive at work, not carrying a substantial size package. Either way you take it, Buell’s story already has problems…let’s look at some more…
Frazier came from Huntsville, Texas and something he had brought with him was a British Enfield model .303 rifle, as he has admitted he liked to hunt. Lee Oswald we know from his brother Robert and friends in Russia, also liked to hunt. So is it out of the realm of possibility that two young fellas who work together and reside in close proximity to each other, that maybe for some fun they went to check out a new shooting range that had just opened?

Pretty much all of Frazier and Oswald’s co-workers at the TSBD seemed to think that Frazier was Oswald’s only “friend”. By Frazier’s own admission in CBS renactment of his drive to Dallas from Irving that morning, he stated it was raining and that he and Oswald talked about the weather. Now imagine yourself giving a friend a ride to work and it’s raining outside, you both woke up late, and you have to park a country mile away from the building you work at…would you be nice and thoughtful and drop your friend off at the building so they wouldn’t have to walk all that way in the rain?

The above picture shows the very long distance Oswald would have had to walk with his “package” that morning. Which, while a good scenario, can we prove it? I’d like to introduce everyone to Edward Shields. A TSBD employee that worked at the other book building where Frazier had to park his car. 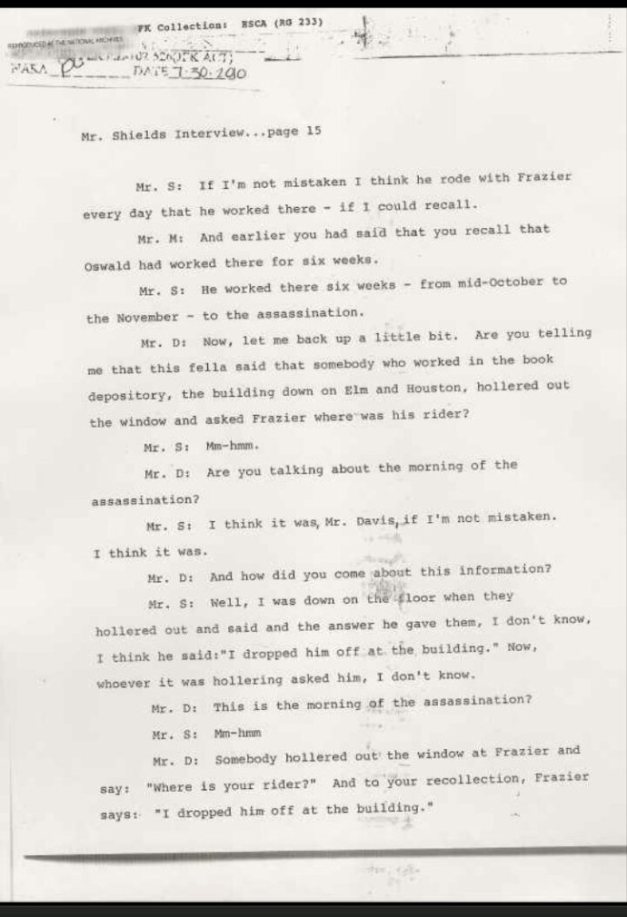 Now, not only do we get the bombshell that Frazier dropped “his rider” off at the building, we also get the very interesting nugget that “nice guy” Buell drove Oswald to work EVERY DAY! Which makes sense if you’re wondering where the bus driver and fellow commuters are that rode with the President’s assassin every day for six weeks are! You haven’t heard from them because they don’t exist! And for naysayers who claim it would have been too far out of Frazier’s way to pick him up and take him home to his rooming house, it was only 1 1/4 miles out of his way to and from…potentially adding only 5 minutes to his commute.

Next, let’s see what co-worker Junior Jarman had to say about Frazier and Oswald to the HSCA… 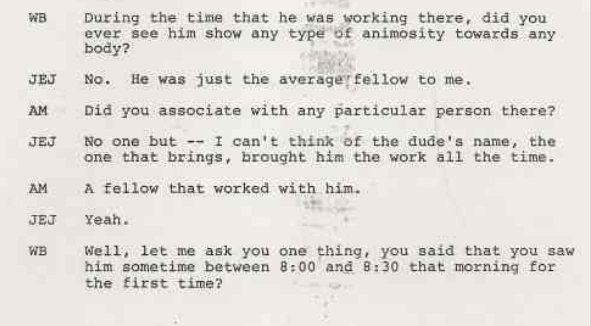 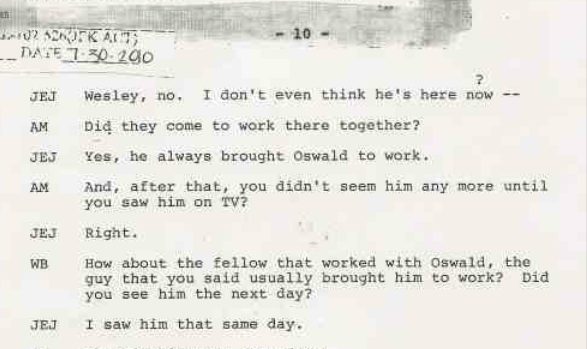 “Brought him to work all the time” and “He always brought Oswald to work” That certainly is interesting as Jarman was the order checker for both Oswald and Frazier and had multiple contacts with both on a daily basis. Let’s see what co-worker Harold Norman has to say to the HSCA….

As I stated before, Buell Frazier didn’t make things easy for HSCA investigators to talk to him. He would repeatedly change the date and location for the interview until finally acquiescing. He used this tactic as well when approached for an interview by author George O’ Toole of The Assassination Tapes, a book chronicling the use of voice stress analysis for persons associated with the Kennedy assassination. Using audio from Frazier’s CBS reenactment, it was determined portions pertaining to Oswald and the package, that Frazier was lying. O’Toole had to hire a private investigator to track Frazier down in the 70’s who recorded another interview with Frazier, with the same results…indications he was lying in his story.
I am reluctant to post any of Frazier’s transcribed HSCA interview here as out of 4 tapes found in the archives, 2 were completely useless, and the other 2 translate very nonsensical and unreadable, making very little comprehendible sense.

Which is a shame because I believe the HSCA investigators were keen to the anomalies in Frazier’s story as many of his co-workers were asked about Oswald and Frazier’s relationship, rides to work, and seeing what each did that day from the time they arrived at work. A few other interesting nuggets gleaned from Frazier’s HSCA testimony…

Speaking of Frazier’s polygraph, many people including Gus Rose (present for it) and R.D. Lewis (administered it), say that he passed it with flying colors. Yet we don’t have a copy of questions asked, answers, or the results to this day.
In closing, from what I can piece together from Frazier’s own interviews in the past and coupling together all the other conflicting testimony, I can only come to one conclusion. It would appear to me that the Dallas Police Department had themselves a young 19 year old boy out of his element and scared to death. A boy they tried to get to sign a confession admitting his role as an accomplice to the alleged assassin. Had Frazier told them the truth about his transportation arrangements with Oswald and the fact that he dropped him off at the building that morning, and that they were more friendly than he let on, they likely could have charged him as being an accomplice. After 10 hours with both Oswald and Frazier in police custody, they needed desperately to put a rifle in Oswald’s hands going into that building that morning, and thus the “package of curtain rods” story was born. It was a win/win situation for Frazier and the police, with Oswald dead, neither one would have to prove anything or testify in a court of law, just the court of public opinion. The burden of truth that Buell Frazier has had to bear all these years as his handlers trot him out to recount his lie year after year, may finally be coming to a head. As we all know with this case, threats of harm to self and family is a great motivator to perpetuate hiding the truth, and hopefully as time wears on, Mr. Frazier feels this pressure lessen and will finally come clean as to the truth of what happened that fateful day in Dallas 51 years ago. When you’re ready to reveal the truth Mr. Frazier, we’ll be waiting.

End note – A special thank you to Richard Gilbride for his HSCA interview notes without which this article wouldn’t be possible CLICK HERE!, Greg Parker, Frankie Vegas, and everyone over at RE-OPEN KENNEDY CASE FORUM Your tireless and exhaustive work is truly commendable!