ON THE PASSING OF GARY MACK by Gayle Nix Jackson 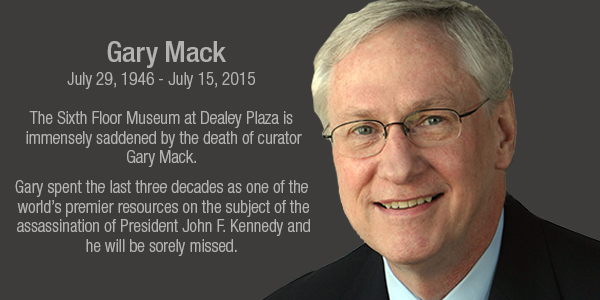 Gary Mack has died.  That’s the name people interested in the JFK called him.  His parents and family called him Larry.  Larry Dunkel.  Being in Radio and Television, he felt Larry Dunkel didn’t have the pizzazz he wanted.  Like John Wayne, Rock Hudson, Wolfman Jack and so many other public personalities he changed his name.  He chose to call himself Gary Mack.
I knew Gary since 1989 and only then because he had read an article about my fight with UPI to get the Nix film copyright back to our family.  He called me and we became fast friends.  He hoped the Nix film would confirm his belief that Mary Ann Moorman’s  Polaroid still showed another gunman he and the late Jack White had dubbed “Badgeman”.  Gary is now gone and I’m still looking for the Nix film.
During the course of our friendship many things happened.   I spoke with people from the HSCA to the Senate to the White House in search of the film.  Gary lost his job with the local NBC affiliate,  suffered through a divorce and helped Conover Hunt with the genesis of the Sixth Floor Museum.     I have since heard that Robert Groden was offered the job as archivist for the Sixth Floor Museum.  Funny, I was friends with him at that time as well and he never mentioned it. I have never known Robert  to indulge in humility.  In fact, it was Gary who suggested I allow Robert Groden to pick up my films from UPI.  Gary truly liked Robert and trusted him.  Later, I found, and Gary felt badly about, that there were rumors and outright confessions of people close to Robert about the liberties he had taken with JFK evidence.    The JFK community is an unbearable bunch of people at times.
Robert and Gary and Jim Marrs and Gary Shaw were all very good friends.  They all worked diligently on the many lies the Warren Commission told and the House Select Committee might have looked over.  Each of them was a credit to the research we all do now.  I met most of the second generation JFK researchers through Gary.  I had met most of the first generation through my grandfather.   Sadly,  I watched their friendships fizzle one by one through the years, including my own with Gary Mack.  Gary turned on Jack White…the same man he had worked with.  Gary turned on Jim Marrs during one of Jim’s classes at UTA.  I was the only female there I think and I was the one who told them to essentially, “Shut the heck up”.   Jim Marrs got his revenge in an interview with Len Osanic on July 15th which I found in terribly bad taste.    Robert Groden brought about his own destruction of friendships due to his “ideas” about who truly owned films and pictures of the JFK Assassination.  He readily enhanced films using a term Gary’s wife coined “Grodenscoping” in order to collect royalties from their usage on network television and documentaries.  Some people will do anything for a dollar, no matter how wrong it is morally, humanly or civilly.
I always felt Gary did the same thing.  He took the job as archivist for The Sixth Floor Museum and didn’t talk with the “conspiracy” side of the JFK case much anymore. We still talked though.  It was Gary who went with me to the FBI when I asked if I could trade my old, spliced, worn copy of the Nix film with their pristine one.  When the Dallas FBI agreed, Gary was amazed.  In fact, he was almost as excited as I was and we went searching for a projector and screen to see what it showed like two little kids who had found their first bottle of wine.    He would call and tell me when networks or documentaries were using the Nix film without permission.  I finally hired the same copyright attorney the Zapruder family used…Jamie Silverberg.  Gary later suggested The Sixth Floor Museum hire him as well, a fact he never shared with me.  When my father chose to sell the Nix film copyright to The Sixth Floor Museum for a fire sale price in 1999, Gary jumped on it.  I found out then how much our friendship meant to him…not nearly as much as owning the Nix film copyright.
The end of my friendship with Gary Mack really hurt me.  I truly thought he was a friend and we both wanted the same thing…to find the Truth about the JFK Assassination.   In later years, I was told by a mutual friend that Gary said, “Gayle is still looking for the Nix film.  She is the most tenacious woman I have ever met.”
I choose to remember Gary that way.  When I read Facebook rants, get phone calls from people who only knew him through emails and didn’t know him personally, or listen to sycophants of some of the biggest liars who call themselves authors and researchers in the case today act like they knew Gary Mack personally,  I physically get a pain in my stomach.
I wish he had stayed true to himself.  I hope he didn’t suffer.  I commend him for talking to so many people on the many JFK Forums on the Internet today. I find myself still looking for his name on the JFK Assassination Forum where he spent lots of time.   Unlike Lee Harvey Oswald, who only a few people knew, many truly knew Gary Mack, both the before The Sixth Floor Museum Gary and the after.   I send my deepest regrets to his family and close friends and hope they don’t read some of the horrible things people “supposedly” in the know say about the man his friends and family loved.  Rest in Peace Gary…you now know what happened to the Nix film and who Badgeman really was.